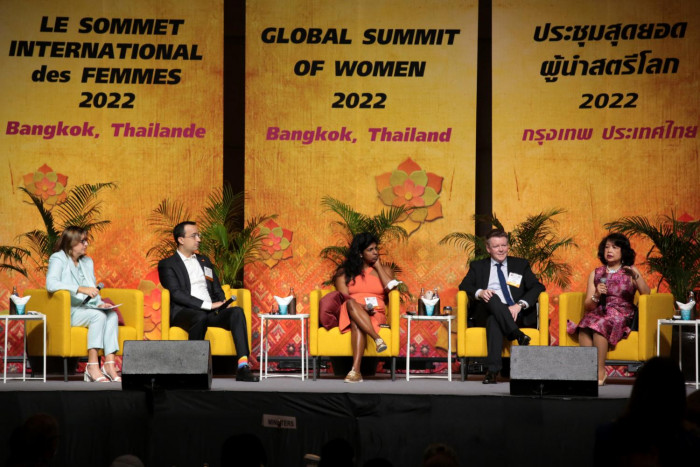 According to leaders of prominent organizations, women have proven to be resilient entrepreneurs, able to adapt to challenges as they gain more and more seats on corporate boards.

They shared their views during a session titled “Global and Regional Megatrends” yesterday at the 2022 Global Women’s Summit (GSW), held at the Centara Grand and the Bangkok Convention Center at CentralWorld.

David Mann, chief economist for Asia-Pacific, the Middle East and Africa at payment service provider Mastercard, said that despite myriad challenges, female employment has increased in 14 economies. , based on the Mastercard Index of Women Entrepreneurs 2021.

The index examines outcomes for the advancement of women, access to knowledge and financial services, and factors supporting entrepreneurship.

Women have surpassed men in entrepreneurial activity in a total of 10 economies, a testament to the adaptability that has been the defining factor in women’s success in business long before the last crisis, he said. .

The United States, New Zealand and Canada are ranked among the top three nations for women entrepreneurs.

Common factors supporting the share of female business owners in these economies are high female enrollment in tertiary education; easy and equitable access to financing; strong government programs for small businesses; high representation of women in leadership positions; and positive attitudes towards entrepreneurship.

The Philippines ranks first for the third consecutive year in results for the advancement of women, with significant progress also recorded by the economies of Botswana, Brazil, Bulgaria, Colombia, Costa Rica, from Russia and Thailand,” Mann said.

He also highlighted the new business opportunities offered by the online channel in the wake of the pandemic.

Other challenges include a change in the retail landscape, technology adoption, environmental changes and a shift in customer values ​​and attitudes, he said.

A Nielsen survey found that women are feeling the financial impact of the pandemic more acutely than men, as four in 10 women worldwide have only enough money to pay basic expenses and 82% of Asia-Pacific women watch their spending.

Women are spending more on groceries, utilities, education, childcare, and financial services, while pivoting their priorities toward wellness.

Some 23% of women surveyed said they preferred hybrid working, up from 13% before the pandemic.

Space economics has recently been in the spotlight with 4,472 active satellites now in orbit.

In the first quarter of 2021, investment from venture capitalists in this area increased by 95% year-on-year, said Mani Thiru, head of space and satellite solutions for Amazon Web Services (Australia), a provider of infrastructure.

She said the world is entering an exciting and bold new space age as the space industry grows rapidly, transforming into a US$1 trillion market.

The number of satellites launched into orbit will triple over the next decade, Ms. Thiru said.

Representation on the rise

Irene Natividad, President of GSW, said gender diversity is at the heart of the recovery.

France, the Netherlands, Switzerland, the UK and Germany are among the top countries that have seen an increase in the percentage of women on company boards, she said.

Many factors could lead to female representation quotas, including legislation, Ms. Natividad said. Some countries impose quotas for women on the boards of listed companies.

Supporting women on boards will never happen unless there are concerted efforts at the national level, she said.

Spirit and American complained the most about US airlines in April: DoT