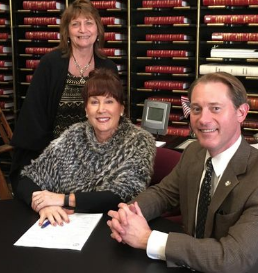 Supreme Court Justice Michelle M. Keller, who has served the court since 2013, has sought re-election for another eight-year term.

Justice Keller is a longtime North Kentuckian who has also served on the State Court of Appeal and served as his representative on the Judicial Conduct Commission. She is chair of the Court of Justice Technology Governance Committee and Chair of the Kentucky Access to Justice Commission and Criminal Rules Committee.

With the impending retirements of Chief Justice John Minton and Justice Lisabeth Hughes, Keller will become the longest-serving member of the Supreme Court.

â€œIt has been the greatest honor of my life to serve my district for the past fifteen years. My strong desire to continue in public service prompted me to seek another term in court, â€Keller said. â€œI have had the privilege of serving with brilliant individuals who have devoted much of their professional careers to providing access to justice for all Kentuckians. With the upcoming retirements of our esteemed Chief Justice John D. Minton, Jr., and Justice Lisabeth Hughes of Louisville, I will soon become the longest serving member of the Supreme Court. I hope to use the knowledge and experience I have gained from my colleagues and from my own service to help direct and guide the Court over the next eight years.

Prior to serving on the bench, Justice Keller practiced law for 17 years. She served as the Kenton County Assistant District Attorney. His private practice has focused in the areas of medical negligence and product liability defense, personal injury and family law, and criminal defense.

Keller also practiced administrative law, representing numerous clients before state regulatory and licensing boards. She is President Emeritus of the Kentucky Staff Council and has served as a hearing officer and member of that Council.

Before becoming a lawyer, she was a registered critical care nurse.

â€œIt’s incredibly humiliating when I think of the fact that I am the first woman to occupy both this seat on the Supreme Court, as well as my previous seat on the Court of Appeal,â€ she said. â€œMy compass has been upholding the constitutions and statutes of the United States and Kentucky, as well as protecting the individual rights of all Kentuckians. Voters of the 6th District Supreme Court of 21 counties have seen fit to elect me twice before with overwhelming margins. I sincerely hope that they will once again grant me the privilege of being their representative at the highest state court in Frankfurt.

She has been twice commended by the Kentucky House of Representatives for her service to the Commonwealth, was named Outstanding Woman of Northern Kentucky in 2012, received the Richard D. Lawrence Lifetime Achievement Award presented by the Northern Kentucky Bar Association ( â€œNKBAâ€) and was the first woman to receive the Distinguished Lawyer of the Year Award by the NKBA.

She graduated from Salmon Chase College of Law at NKU, holds an MA from the Salmon P. Chase Inn of Court and served as President of the Inn from 2012 to 2013. She is also a Fellow of the American and Kentucky Bar Foundations. At Chase, Judge Keller was an IOLTA Fellow, earning her Juris Doctorate in 1990. Chase presented Keller with the Chase Excellence and Chase Awards for Outstanding Service in 2007 and 2011 respectively.

Judge Keller and her doctor husband Jim are the parents of two adult daughters. They live in Fort Mitchell.

â€œI couldn’t do what I’m doing on my own, and my wonderful husband, Jim, and our daughters, Brenna and Olivia, have been with me every step of the way,â€ she said. â€œIn addition, I am fortunate to have excellent staff in my judicial chambers, and their work ethic is great. ”

Most of what you know about the business goal is wrong