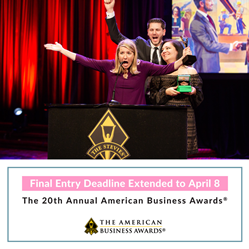 The Stevie® Awards, organizer of the American Business Awards®, today announced that the entry deadline for the 20th annual competition has been extended to April 8, 2022.

The Stevie® Awards, organizer of The American Business Awards®, announced today that the entry deadline for the 20th annual competition has been extended to April 8. No additional late fees will be charged. Entries submitted by the new deadline will not be penalized in the judging process in any way.

“We have received so many requests for individual deadline extensions that we have decided to extend the deadline for everyone,” said Stevie Awards President Maggie Miller. The original final deadline was March 9.

The American Business Awards are widely considered the premier business awards program in the United States. All organizations operating in the United States are eligible to submit nominations – public and private, for-profit and not-for-profit, large and small. The 2022 awards will recognize achievement since the start of 2020. Entry details are available at http://www.StevieAwards.com/ABA.

The American Business Awards recognize achievement in all facets of the workplace. Categories include:

New category groups for 2022 include:

More than 250 professionals from across the country will participate in the evaluation process until mid-April. Gold, Silver and Bronze Stevie® Award winners will be announced on April 28 and celebrated at a gala in New York on June 13.

Every new product or service nominated for the 2022 American Business Awards will automatically be included in voting for the People’s Choice Stevie Awards for Favorite New Products, an annual ABA feature in which the general public votes for their favorite new products. Voting will open on April 29.

The list of past Stevie Award winners at the American Business Awards reads like a who’s who of innovation and business success in the United States Check out the list of winners from last year.

About the Stevie Awards

Share the article on social networks or by e-mail: