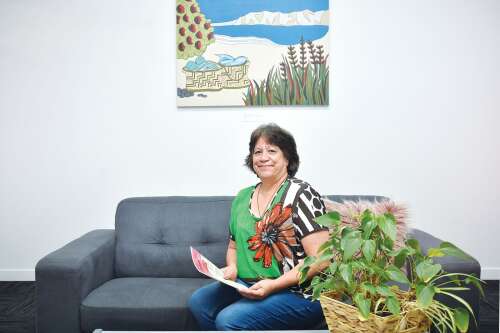 Rongowhakaata Iwi Trust President Moera Brown tells the Gisborne Herald about the many hats she has worn in her professional life.

“I never looked up to a cop when I was five and thought that was what I would be,” says Moera Brown.

“I actually looked up and thought, ‘this will never be a job for me.’

“I guess I was ready to take a trip where I wasn’t sure the outcome,” she says.

It was a busy life for Moera growing up. She was the oldest in a family of 13, with five sisters and seven brothers.

She attended Gisborne Girls’ High School and after graduation was offered a cadet position in the Department of Agriculture and Fisheries.

“I worked with a girl whose father was a police officer. She invited me to a police recruiting seminar.

“The recruiting officer there told me that he was looking for young Maori women like me to join.

“At first I thought it wasn’t my thing, but I still took the test and got accepted into New Zealand Police College.”

When she told her parents, her father wasn’t convinced that police were a woman’s job, as her mother told her to make the most of the big opportunity, Ms Brown said.

“No one in our family considered policing a career. I was only 20 when I went to police academy.

“When I graduated, they wouldn’t let me go back to my hometown because you know too many people. I was posted to Lower Hutt and later in 1979 transferred to South Auckland.

Ms Brown said it was not until someone called her a “Maori girl” when she was a police officer that she suffered racial inequity. Nevertheless, she continued her career, enthusiastic and ready to take on new challenges.

“I found the career to be quite interesting, its unfamiliar nature, the different components of what you may be faced with: guns, driving a hot pursuit with sirens and self-defense.

“I was very excited about it all.

“Part of it comes from my past in Rongowhakaata because we are very good at entering unknown spaces.”

She said there were challenges.

“From a tikanga perspective, the hardest thing I found while working was dealing with dead bodies.

“In kaupapa Māori, they are very tapu, but in police proceedings, it’s just a person who died and you have to take him to the coroner.

“I had to make a few phone calls home to find out how to take care of myself.

“The number of Maori women in the organization was limited – you couldn’t really go to your mate and say, hey, what are we supposed to do here? I was one of the two at Lower Hutt.

As a police officer, she was interested in community and young people, as a woman in a detective or CIB role would mean that she would have to limit herself to dealing with female or child victims, whereas in d In other roles, she had a sense of fairness and the ability to interact with whānau Māori.

“There were a lot of young offenders in South Auckland from young Maori and Pasifika. And that left them with significant trauma.

“No different from now on really.

“The interaction with the community was really important, the ability to work collectively. “

Later, Ms Brown decided to return to police academy as an instructor and update the program with what happened in the field.

“In 2000, I came back home (Gisborne), where I was the first female senior sergeant in the area. I spent 14 years in this role and then retired.

After working 33 years in the police force, retirement did not stop Ms Brown from pursuing her next adventure.

“I started working as a restorative justice facilitator. In this role, I was able to create opportunities where people would use the process as an alternative to the justice system.

“Gisborne Girls’ Secondary School has started using it for the treatment of disciplinary issues.

“I was and still am very privileged to be part of this type of process through the Restorative Justice process and Whāngaia Ngā Pā Harakeke.

“There has been quite a powerful healing for people through this process. “

Ms. Brown has also been involved in the leadership of the iwi through her father’s whānau connections to Rongowhakaata and Ngāi Tamanuhiri.

“Police were responding to daily demands a lot in a global operation, while the iwi leadership space was really new to me and always evolving.”

As part of her restorative justice role, Ms. Brown has been asked to lead the iwi Police Partnership, Whāngaia Ngā Pā Harakeke (WNPH) – A Collaborative Approach to Domestic Violence Incidents.

She has definitely come a long way in her professional life, and now she co-leads the WNPH Partner Program. She is eager to reduce her hours to devote herself to her mokopuna and her whānau.

A time management hack to beat the pandemic blues