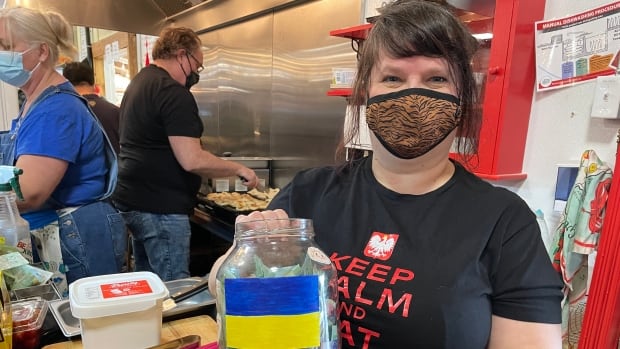 Perogies for peace: an islander raises funds for Ukraine with a dish of potatoes

A woman from Prince Edward Island has raised thousands of dollars to support Ukraine by donating perogies.

Grandma Jaworski’s Foods was busy Saturday as hundreds of customers flocked to the Charlottetown Farmers’ Market to show their support.

The business owner says the hope is to secure financial assistance for people in Ukraine affected by the Russian invasion of the country.

“I hope it will happen very quickly at ground level because there are people who are hungry, thirsty and need supplies, medicine,” said Lori Jaworski.

She attended the raising of the Ukrainian flag at Charlottetown City Hall a few weeks ago. It was there that she came up with the idea of ​​giving away perogies in exchange for donations to the farmer’s market.

Jaworski donated 5,000 perogies and raised over $5,000. She said it was matched by the Canadian Red Cross.

“The [Canada-Ukraine] The Foundation people here on the island will come and take money and immediately transfer it to people who need it,” she said.

Jaworski is of Polish descent and cannot help but draw parallels.

“My people were expelled from Poland during the [Second World] war and my great-great-grandmother was killed in front of her children by the Hitler regime,” she said.

Ghislaine O’Hanley is a friend of Jaworski’s and stopped by to donate to the cause and pick up perogies. She is not surprised that Jaworski is trying to help.

“Lori’s first thought is always with others,” she said. “The money we raise here today, I’m sure, will be well used to help support people in crisis.”

O’Hanley said there were many fundraisers going on locally and she gave as much as she could. She encourages others to do the same.

Jaworksi is proud of the island community that wants to help Ukrainians.

“You couldn’t take the smile off my face, I’m tired, but my heart is bursting. My community is awesome. I’m proud,” she said. “I brought in an older woman and she had an envelope that said ‘For the Ukraine War Effort’…and I was choking back tears.”

Jaworski said she may be hosting another fundraiser in the near future, but first she needs some rest.

What happened on Day 16 of the Russian invasion of Ukraine?