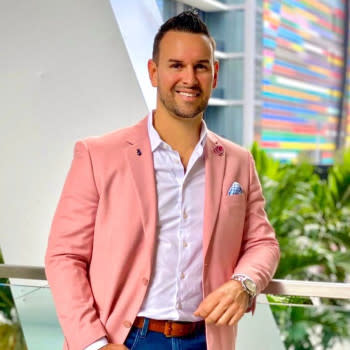 A shocking study involving only Millennials found that 84% were financially illiterate. Concern for the financial future of those aged 18 to 34 is greater today than at any time in history. Miami-based school Kingdom Financial Academy has helped underserved communities break free from financial strongholds. However, they (like many nonprofits) depend on donations from those with a desire to make a difference.

Enter Rey Perez, a global brand expert, serial entrepreneur and philanthropist who has spent more than two decades building a global brand empire by empowering executives to maximize their influence and monetize their mission. He does this by inspiring entrepreneurs and business owners to “bring out their inner superhero and share it with the world.”

Rey has partnered with Daniel Isaiah Shalach, a local pastor and co-founder of Kingdom Financial Academy, to make an impact in their South Florida community. Shalach, who himself has partnered with many faith-based entrepreneurs to grow their businesses and is an accomplished digital marketer, was looking for an angel and he found him in Rey.

Daniel’s passion for empowering survivors of domestic violence is matched only by his desire to reach out and teach adolescents who left the foster care system at age 18 and find themselves in a shelter for homeless. Kingdom Financial Academy serves them by guiding them through the steps to gain financial clarity while sharing the secrets to mastering their finances and credit.

“When I first contacted Rey, I knew he had both the right connections and the passion to make a difference. I didn’t expect him to feature our nonprofit as a beneficiary of his Business Growth Bootcamp. He partnered with several entrepreneurs from across the country who attended his live event and raised $ 3,300 for our charity. He then pledged to help us raise the remainder of the $ 27,000 we need to empower 1,000 families in the first half of 2022. ”Shala’h said.

Perez, who has appeared in several publications such as Forbes.com and Entrepreneur.com, has spent the last few years perfecting a next-level digital business card app that connects all of your media in one place called My 360 Sites. Rey is hosting a two-day branding event called Brand in 2 Days where he (along with other national experts) shares with entrepreneurs and professionals how to generate more leads and sales for their business by leveraging this revolutionary new app. .

The Brand in 2 Days December event was where Rey decided to kick off her union with Kingdom Financial Academy to break down financial strongholds while giving back to her beloved local Miami community in 2022.

“I already have a non-profit organization called ‘Influence With Love.org’. It focuses on supporting disadvantaged children, teaching them entrepreneurial skills and mentoring them to help them understand that they can be whatever they want in their life. We support several youth organizations in the United States and around the world, such as Colombia, where the level of poverty is devastating. These children (many orphans) just want to be loved and to know that they can have hope to change their future. Partnering with Daniel has allowed me to be part of an impact here and now in South Florida. Daniel presented the opportunity, and I stepped up without asking a question. Rey said.

Rey is part of a socially conscious business movement that empowers entrepreneurs, business owners and / or anyone who wants to make a difference to do so by donating their TIME, TALENT or TREASURE. He is focused on his 2022 goal to change lives on three levels, locally by partnering with Kingdom Financial Academy, nationally by mentoring his clients on professional branding in a way that properly emphasizes valuing their skills and passions, and finally, globally reaching out to orphans and young people. in other countries with few resources.

If you would like to learn more about supporting this great cause or to connect with Rey Perez, you can reach him and his team at www.ReyPerez360.com