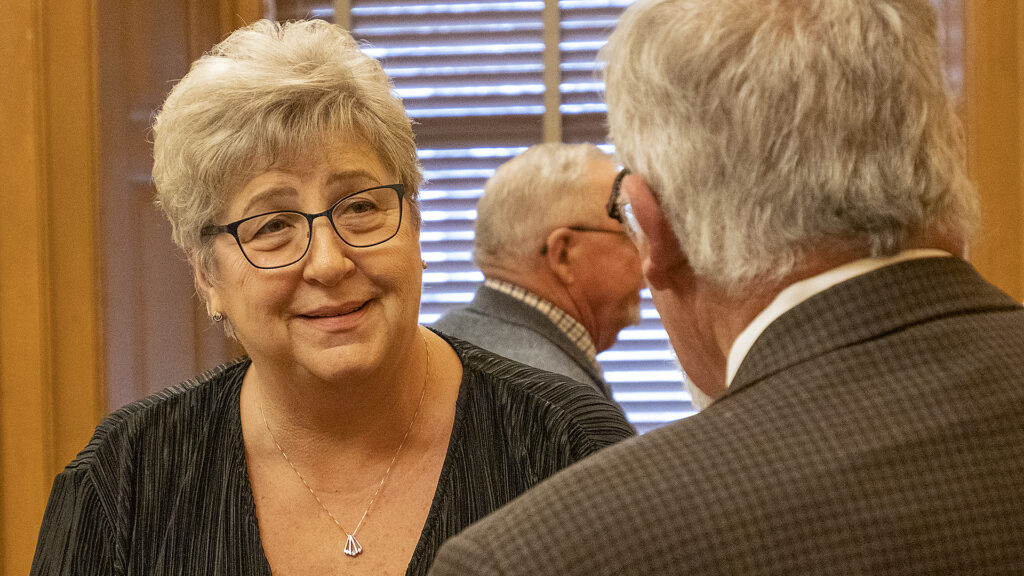 TOPEKA — As the daughter of a retired small-town funeral director, Heather Braum says she has walked through the cemetery many times.

And, she told lawmakers on Monday, she noticed something about older sections.

“There are so many infant and child graves all over the place, many without names or dates,” Braum said. “If there are dates given, they are much too short.”

Braum, the health policy adviser at Kansas Action for Children, says new sections of the cemetery don’t have those graves thanks to childhood vaccines. She asked members of the House Health and Human Services Committee to reject House Bill 2498, which would strip Kansas’ health secretary of the power to require children attending school or daycare to be vaccinated against COVID- 19.

Anti-vaxxers have insisted that the legislation simply provides checks on the powers of a single unelected official. Health professionals have sounded the alarm that this is the first step to making all vaccines optional.

Rep. John Barker, R-Abilene, effectively blocked an attempt by committee chair Rep. Brenda Landwehr, R-Wichita, to proceed to a vote immediately after hearing testimony on the bill for the first time. The procedural move puts the legislation at risk because the Landwehr committee is not due to meet again this session.

This is the third consecutive session in which similar legislation has been heard by committee. Ashley Goss, assistant secretary for the Kansas Department of Health and Environment, told the committee that the secretary has no plans to add a COVID-19 vaccine to the list of required childhood vaccinations.

Representative Brett Fairchild, R-St. John, introduced HB2498 with the support of eight other House Republicans who co-sponsored the legislation.

“This bill has nothing to do with vaccines, including the COVID vaccine,” Fairchild said. “This is by no means an anti-vaccine or anti-vax bill. All it does is simply take power away from an unelected bureaucracy, empower the people through their elected representatives to manage the issue.

Anti-vaxxers who testified in favor of Fairchild’s bill bombarded lawmakers with inaccurate claims about the licensing of COVID-19 vaccines, the time it took to develop mRNA technology, the number of people involved in studies of vaccine safety and effectiveness, and number of people injured or killed by vaccines.

Lauren Shiffman said that as a mother of two young boys in Lenexa, her job is to research and make sound medical decisions for her children. She objected to the idea that the state’s chief medical officer should make decisions for parents.

“It was a serious concern before with other vaccines, but it’s absolutely terrifying when we’re talking about a non-FDA approved experimental gene therapy injection that was rushed to market and never used before. “, she said.

Shaun Heald described COVID-19 vaccines as “potentially catastrophic, ineffective against disease, dangerous, useless, but without liability and very cost effective”. He falsely claimed that vaccines are more harmful to children than COVID-19 and that vaccines are responsible for variants of the disease.

“The media is currently working overtime to convince us that healthy children having strokes, heart attacks and blood clots are either normal or caused solely by COVID,” Heald said.

Sarah Irsik-Good, board member of the Immunize Kansas Coalition, pointed to the 214 million Americans who are fully vaccinated against COVID-19 as proof that vaccines are safe. She said the legislation represents an attempt to challenge the health secretary’s authority over all vaccines.

Kelly Sommers, director of the Kansas State Nurses Association, said she was baffled by the lack of trust people have in nurses who work to provide children with the best possible care, not to hurt them.

As a mother, Sommers said, she had to watch her child being pricked with a needle and hear him cry, but she knew his health was important.

“I was educated enough to know that I was making the right decision on behalf of my child, and I was not influenced by people who did not have my child’s best interests at heart, who did not no other political agenda, instead of taking care of our children,” Sommers said.