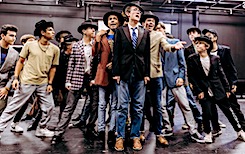 ‘Guys and Dolls’ gets a boost from the Staples Players angels

WESTPORT — When the Staples Players’ production of “Guys and Dolls” hits the stage next month, some credit must go to a newly formed parents’ club.

Staples Players Boosters Inc. donated $6,650 to supplement the salaries of choreographers and technical directors associated with presenting the award-winning musical.

The Board of Education this week unanimously accepted the gift.

Supt. of Schools John Bayers compared the gift to those given seasonally by parents in the district to support stipends given to Staples athletic trainers.

“These are really, really amazing professional quality shows that we wouldn’t be able to do without additional funding beyond what’s provided by the city budget,” Benanav told the board.

She said the expertise will support Staples productions at the level people have come to expect.

Freelance writer Linda Conner Lambeck, a journalist for more than four decades at the Connecticut Post and other Hearst publications, is a member of the Education Writers Association.

Rick Ross to sue woman for using ‘Boss’ on her business