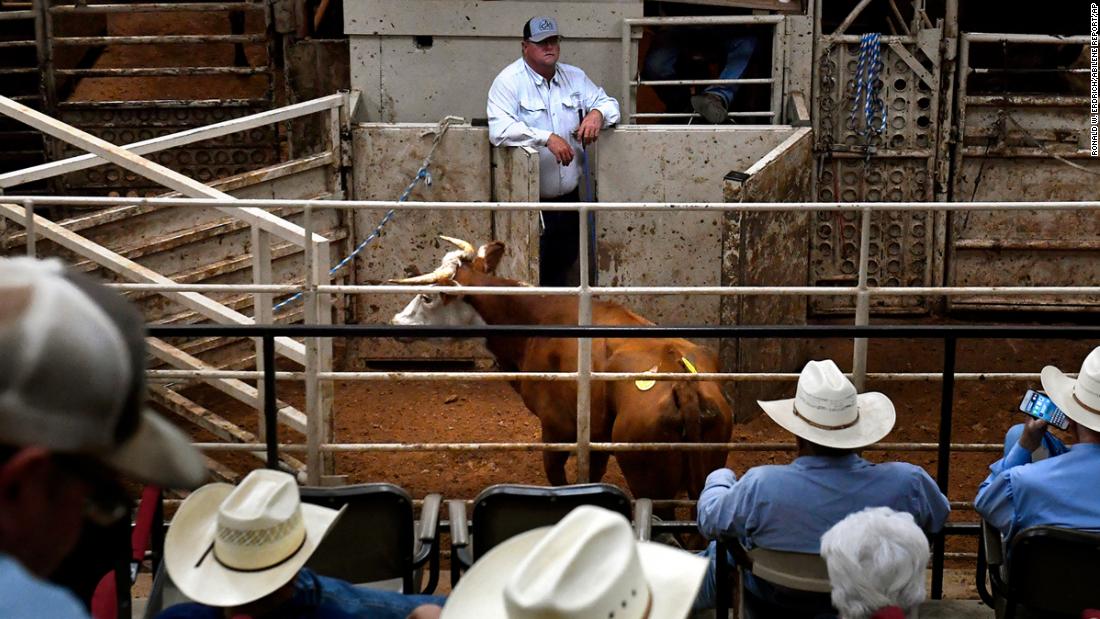 Nearly 80% of the western region of the United States is experiencing extreme drought conditions — and has been for nearly a year, according to the America Farm Bureau Federation. But the most recent week-long heat wave, affecting nearly 80 million people across the country, has brought things to a boil for farmers and ranchers.

Temperatures in Texas have hovered around 100 degrees for weeks, depleting water and scorching grass – both vital to feeding and sustaining herds of cows. Some breeders say their only option is to sell.

“We haven’t had this kind of movement of cows to market in a decade, since 2011, which was our last really bad drought,” said David Anderson, professor of agricultural economics at Texas A&M.

Last year, a severe drought in the West forced 40% of farmers to sell part of their herds, according to a AFBF survey. Now inflationary costs for things like feed, fertilizer and fuel are only making the situation worse. Many cows are auctioned off.

Tucker, a fifth-generation cattle rancher, says himself that he waits to sell his cows until there is no more grass to eat. He supplements his herd’s food with seeds, but this turns out to be very expensive.

Although ranchers are reluctant sellers, they are at least getting a good price in the market, according to Anderson. This could eventually mean lower prices for consumers. The price of ground beef to U.S. consumers in June was up 9.7% over the past year.
But the concern is the prices in the future. With smaller herds and fewer breeding cows, the next two years could mean higher beef prices for consumers. The United States Department of Agriculture, or USDA, provides a 7% drop in beef production Next year.

Farmers and ranchers may be eligible for financial assistance through the USDA Livestock, Honey Bee, and Hatchery Fish Emergency Relief Program. The program covers additional costs that herders may incur to haul water or move livestock to better pastures.

There is a caveat – ranchers must live in a county with a severe drought rating level for an extended period of time, as measured by the US Drought Watch.
In Missouri, Governor Mike Parson signed a executive order thursday offering aid to 53 counties in his state affected by extreme drought.

“I know that on my farm, conditions have deteriorated rapidly, and we are hearing the same reports from countless other farming families and ranches across the state,” Governor Parson said in a news release.

The ordinance directs the Departments of Natural Resources and Conservation to allow farmers access to water in state parks and other conservation areas. Additionally, Parsons ordered the Missouri Department of Transportation to roll back fees and restrictions on farmers and ranchers hauling hay.

3 infrastructure stocks to buy before the market rally