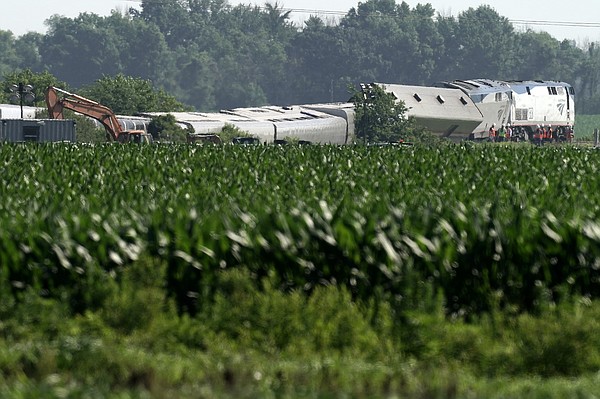 One of Missouri’s busiest rail lines is closed after an Amtrak train hit a dump truck and derailed Monday afternoon, killing four people.

The incident and subsequent investigation could delay supply chains.

“This is an extremely busy line through Missouri,” said Linda Wilson Horn, director of communications for the Missouri Department of Transportation. “I don’t have numbers on that particular line, but I’ve been told it’s one of our busiest routes across the state, so you’d expect the closed line to affect supply chains, but I don’t have the details on that.”

Horn said it was unclear how long the runway would be unusable because the National Transportation Safety Board (NTSB) sent a 14-person “start-up team” on Tuesday to investigate the incident and analyze the scene. . Amtrak began removing the derailed cars on Tuesday.

NTSB Chair Jennifer Homendy said the trains will be unable to use the tracks for “a few days” while they investigate.

About 275 passengers and 12 crew members were on board the Amtrak train traveling from Los Angeles to Chicago when it crashed Monday afternoon into a dump truck near Mendon, Missouri, in Chariton County. The dump truck was obstructing a passive crossing, which had no active warning devices such as lights, bells or arm gates.

Impact with the dump truck killed the driver and two Amtrak passengers died when the Amtrak cars derailed. Another passenger died at Columbia University Hospital. About 150 people were transported from the scene to 10 area hospitals for treatment of minor to serious injuries, according to the Missouri Highway Patrol.

At a press conference early Tuesday evening, Homendy said investigators were downloading the train’s event recorder to produce information about train speed, brake application and when the driver sounded the horn. She said they would also upload footage from two forward-facing cameras on the train.

The NTSB is also requesting inspection information from Amtrak, but Homendy said she is not concerned that mechanical or technical failures caused the accident.

The incident and investigation could impact the ability of trains to transport consumer goods through Missouri, a critical supply chain state in the center of the country.

BNSF Railway, the company that owns the Southern Transcon railroad where the crash happened, carries about a third of North America’s intermodal volume, according to its website.

BNSF did not immediately respond to request for comment on Tuesday.

According to a 2018 company description of Southern Transcon, it is the company’s primary route for its intermodal franchise.

BNSF uses the line to ship trailers and containers with everyday items, such as clothing, appliances and electronics, and, in some cases, high-priority items. There are about 300 trains on Southern Transcon at any one time and each train carries up to 280 trucks, depending on the description.

Joni Casey, president of the Intermodal Association of North America, said the Southern Transcon route is one of the main routes for the movement of goods from Southern California to Chicago with more than 17 million loads carried by way of iron every year.

MoDOT studied supply chain issues across the state as the leader of Governor Mike Parson’s Supply Chain Task Force, which it called to action in November 2021. The task force released its draft recommendations earlier this month and suggested more investment in rail and multimodal. dispatch.

There are more than 6,500 railroad crossings in Missouri, with at least one in 90 of the state’s 114 counties.

Of the state’s 4,381 public crossings, 3,311 are at grade and about half have active lights or gates and the other half don’t, according to the Missouri Highway-Rail Grade Crossing Action Plan that MoDOT has submitted to the Federal Railroad Administration in January.

Horn said the state receives $6 million from the Federal Railroad Administration and generates about $1.5 million in taxes annually to work on crossing improvements with private companies.

The BNSF County Road 113 crossing in Chariton County has been identified for improvement funding, Horn said, which could include pavement improvements and the installation of lights and barriers. .

“The development of specific projects is done in coordination with BNSF and the county on the basis of very limited funding,” she said. “The next step for this location is to work with these parties to develop an agreed-upon solution and schedule. Then the railroad will hire a contractor to complete the work and MoDOT will administer the federal reimbursement.”

The Mendon derailment did not affect the daily Amtrak Missouri River Runner train that runs through Jefferson City from major metropolitan areas in the state.