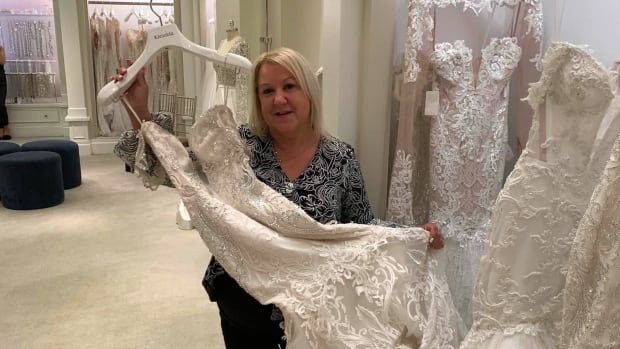 A Promise Kept: A Woman Visits a World-Famous Bridal Boutique in Honor of Her Late Mother

The former western Newfoundland bridal shop owner recently took the trip of a lifetime to one of the most famous boutiques in the world in memory of her business partner: her mother.

Sandie Batt is the former co-owner of Mavis Fashions and Bridalwear, a business she started with her mother, Mary Mavis, who was a master tailor and owned a drapery business.

While the duo helped brides find the perfect look for their special day, they also had a blast watching the TLC reality show say yes to the dressshowcasing the work of Kleinfeld Bridal in New York.

“Let’s just say this is the Cinderella story of all the little girls,” Batt told CBC News this week. “This is where Cinderella definitely comes to life. Kleinfeld’s is the largest and finest bridal store in the world.”

Batt said she and her mother often use the dresses featured on say yes to the dress as inspiration for their own shop.

“You always tend to admire something, whether it’s just in your personal life or your professional life,” Batt said. For them, she said, Kleinfeld Bridal was “the epitome of consumer relations for brides, where brides live out their dreams, customer service.”

“They just excelled in all of it. So of course it was somewhere we both decided to go. We had to go and we had to go together.”

Unfortunately, this dream never materialized. Mavis died in the summer of 2010. After being hospitalized with her illness, three months before her death, she asked her daughter to keep two very important promises.

The first was for Batt to take her kids to Disney World and take a picture of Cinderella’s Castle on Mavis’ birthday, which she did. The second was to make the trip to Kleinfeld Bridal, knowing that her mother would be with her in spirit.

For more than a decade, Batt couldn’t bring himself to make the trip. But that changed this year.

“There was just something that felt good. It felt like the moment,” she said.

Batt sent Kleinfeld Bridal an email, detailing her story, which was sent to the company’s customer service department. She received a generic email in response, stating that the public was invited to come and take pictures of the store.

If that was all she could get, Batt thought, that would be enough.

“I still would have made it there for us,” she said, adding that she had a necklace with a picture of her and Mavis that she planned to bring.

A few days after receiving the email, Batt was shocked to receive a call from a store representative, who explained that customer services had passed her story on to the owners, who had something bigger in mind.

They invited Batt and her husband to spend the afternoon with them for a full tour of the business, from the storefront to the backstage, in the retouching department. Kleinfeld Bridal suggested August 17 for the tour, a date that holds particularly strong significance for Batt.

“My mom and I’s birthdays were a big thing,” Batt said. “We celebrated each other’s birthday. I knew right away [that] my mother played a big role in that. They actually chose my birthday.”

When the day came, Batt wore the locket with her mother’s photo, ensuring that she too could soak up every second of the experience.

“I’m an emotional person, especially when it comes to my mother. Tears flew everywhere.”

Ready to go12:30Visit to Kleinfeld

A woman who ran a fashion and bridal boutique with her mother in Corner Brook has a dream come true with a special visit to Kleinfeld Bridal in New York. (Anthony Germain with Sandy Batt)