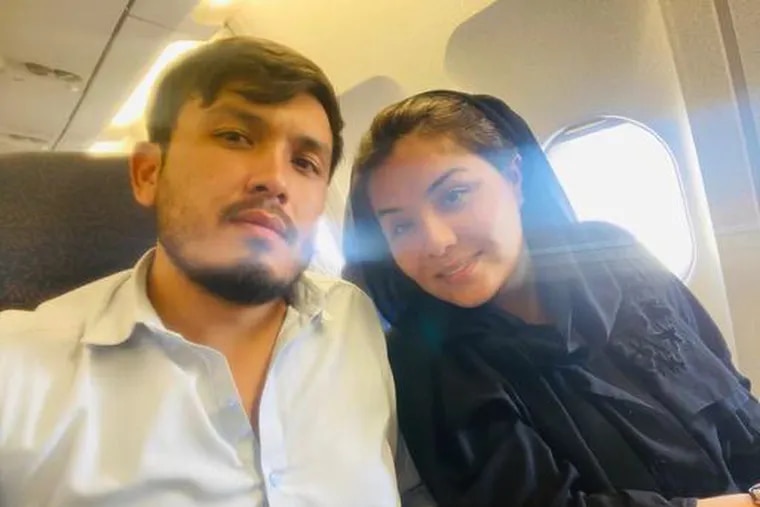 At the end of August, I wrote about two exceptional Afghan women who were struggling to escape prosecution by the Taliban. One had managed to leave the country and the second was still in hiding in Kabul.

Miraculously, Najlla Habibyar, US green card holder and US aid worker, has now fled to Abu Dhabi, the capital of the United Arab Emirates, with her family. But its heart-wrenching odyssey – and its current plight – reminds us that the American effort to deal with the Afghan evacuees has been almost as chaotic as the exit from Kabul.

READ MORE: The story of two Afghan women, one who escaped and the other who cannot | Trudy rubin

Legislation is pending in Congress to alleviate these problems, but it is not known when or if it will be passed. As Najlla’s story shows, it should be soon.

I met Najlla at the end of May at an exhibition in New York of brightly colored Afghan rugs organized by the Kabul Carpet Export Co., one of the projects funded by the United States Agency for International Development (USAID) which has had a real impact.

As the Director of Afghan Personnel, she helped Afghan women weavers set up their own businesses and sell directly overseas, rather than going through Pakistani middlemen who carved out the lion’s share of the profits. A well-known businesswoman, she was on the Taliban target list.

When the Taliban took the city, she went into hiding. “I tried to contact everyone, USAID, State, but eventually contacted veterans of Digital dunkirk, “she told me. She was referring to the organization of former US military officers who organized an underground network to rescue the Afghans who aided the Americans – and who were not evacuated by the US government.

She was told three times to go to the airport, but she was beaten, gassed and shot.

On two occasions the family sat on buses outside the airport gates, once for 28 hours, once for 16 hours, without food or water and threatened by car bombs – and were not allowed to enter.

Finally, a contact from Digital Dunkirk advised Najlla to take her family to the town of Mazar-i-Sharif, in northern Afghanistan, and wait for the departure of a chartered plane.

Like Moses leading his flock to the Promised Land (hopefully), she dragged her loved ones to a rented apartment in Mazar. Each time, the phone call came to get to the airport, but the flights were canceled – as the Taliban demanded impossible bribes.

Finally, Najlla’s scruffy family boarded a plane carrying 397 Afghans, but the flight was almost canceled – when a stowaway was found in the baggage hold.

After landing in Abu Dhabi, she recalls, “it was like a scene from a movie, with Emirati policemen all around the plane with guns. When we got to the barracks, the guards looked at us like we were in jail I cried so hard.

At present, Najlla and 20 of her relatives are crammed into barracks buildings once used for immigrant workers. Most of his adult parents worked for the military or the US government. The area has been nicknamed International Humanitarian City and now detains at least 7,000 other Afghans.

Separated from most of her relatives, Najlla and her husband were allowed to go out for two hours a day, until fear of COVID-19 led to a total lockdown.

Many of his Afghan compatriots are large rural families of Afghan special forces fighters who gave them access to Kabul airport, or ordinary Afghans who rushed to the airport at the start of the chaos. We don’t know what will happen to them.

Najlla has no idea when or if her family will be granted consular access to the United States, and how many of them will be allowed to enter the United States. “These are difficult times,” she told me, weeping softly. “My family has lost everything and we don’t know what’s going to happen.

Najlla has yet to see a US consular official. “You can’t find anyone in charge,” she worried. “There are so many people, and the Emiratis cannot afford to sort them.

Najlla’s story is typical of the confusion surrounding the aftermath of the last-minute rescue effort in Kabul.

Having worked to help the Afghans escape, I have witnessed an unguided exodus. An internationally renowned women’s rights activist has been stranded with her family and thousands of other Afghans for weeks at the Marine Corps base in Quantico, Va.

They have not been given any idea of ​​their visa status or when they will be released. Her daughter had to postpone a full scholarship to do a master’s degree at the University of Pennsylvania because there is no internet, so she cannot take courses online.

My colleague Jeff Gammage has written about the confusion over the visa status of the thousands of Afghans who have been released on humanitarian parole and are now alive To other US military bases, including 9,500 in a tent camp in McGuire-Dix-Lakehurst Joint Base in the south of Jersey.

READ MORE: Most Afghans Arriving in America Are Not Strictly Refugees

Yes, around 130,000 Afghans were airlifted out of Kabul. Yet many of the most deserving, including those who worked for US military and civilian agencies, have been left behind.

And tens of thousands of escapees are now stranded in temporary detention camps in the Arabian Gulf and Europe, as well as military bases in the United States, because there was no preparation to deal with them – and their visa status is still unclear.

Najlla and her family are the best kind of refugee America can hope to welcome. It is time for the State Department and Congress to organize a legal system to admit them into what was once called “the Promised Land.”